The Way Way Back

About 3 years or so ago, I started to write a memoir of the summer of 1972. When I enrolled in a Ph.D. program, I put aside the work in progress, but I still think about it a lot, and hope to get back to it someday. I envision something poignant yet with humor, along the lines of Haven Kimmel’s A Girl Named Zippy. If you can’t laugh at your own dysfunctional family, life can be pretty grim.

A little back story: in the summer of 1972, my mother, who until late 1971 had seemed to be a sensible, level-headed woman, married her second husband, Van, who I thought then and still sometimes think, was the devil. He was tall and freakishly thin, with a pointy beard. He smoked and drank pretty much all of the time, and didn’t really seem to like children.

My mother, at the time 36 years old, a pretty widow with 4 children, had dated and had some serious beaux, some of whom we all liked and wouldn’t have minded her marrying. All 4 of us were in agreement that we greatly minded her marrying Van.

But marry him she did, on July 15, 1972. She sold our beloved house on Dyson Drive, and we moved to the previously unknown (to us) city of Sacramento, California.

Or some of us did. Cathy, #1 sister, was already married herself, with an adorable baby who I was going to miss seeing grow up. Ellen, next up, was forced on the death march to Sacramento, but then would fly back to Atlanta to finish her senior year of high school while living with her best friend. Brother Steve and I had no choice in the matter. I was 10 and he was 14. I even considered asking to live with my grandmother, Nanna, but I was a little afraid of her anyway and figured it wasn’t going to happen.

We were loaded up in the Chevrolet Impala station wagon, and began the 2 week trek along the southern route from Georgia to California. Remember, it was summer and there was no air conditioning in said station wagon. No one used the term second-hand smoke. MADD had yet to be formed. And Ellen has a tendency to car sickness (somewhat exagerrated in my writing, sorry Ellen).

Van did all of the driving, both he and Mom smoking and drinking Seagram’s Seven with ginger ale the entire journey. He had this black case that looked like it was for some sort of spy business; it was the mobile bartending set. 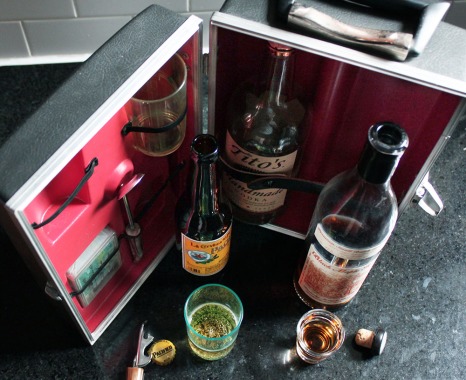 He was never pulled over for drinking while driving or, as I hoped he would be, child endangerment. In my daydreams while in the hot, smoky car, we would be taken by law enforcement and sent back to Nanna and Cathy in Atlanta. My mother would cry and realize the error of her ways, Van would be thrown in jail, and we’d go back to life as it was meant to be.

No such luck. I spent a lot of the trip in the “way back” of the station wagon, as far from the front seat and the devil as possible. Have you seen the film The Way, Way Back? That brings up a lot of memories for me.

That’s the summer I was given my nickname Little Shit. Of course, Van was the only one who ever called me that, or even seemed to think I was such a thing. He did bring out the worst in me, I admit.

I’ve decided to start posting some excerpts of what I’ve written so far, just for fun. It’s the first draft, not particularly polished. Today’s vignette takes place in the New Mexico desert. We have just spent way too long in Texas, and are finally headed from El Paso to Tucson, Arizona.

“I really need to pee!” I wail from the way back of the station wagon, where I’ve set up camp behind the ice chest with my books and art supplies. Ellen moans from the back seat, “I have to throw up.” She’s been carsick since we left Georgia. We all hoped the straight, flat roads of the New Mexico desert would help, but she’s still curled in a hot, sweaty, miserable ball. Up in the driver’s seat, Van takes a sip of his drink and, through exhaled cigarette smoke, says grudgingly, “Okay, but be quick,” as he pulls off the road into the only gas station for miles.

I jump out of the car and run to the gas station bathroom. As I hurry back out, I can see Steve’s gleeful face at the back window, waving goodbye to me and pressing down the door lock as the station wagon pulls out of the gas station and enters the lonely highway, a trail of dust in its wake.

I don’t cry. I don’t chase the car. It’s hot in New Mexico, but different from the heat of Georgia, and I like the way the sky stretches out in all directions, nothing green to be seen. “Excuse me, sir, is there a Coke machine?” The man at the pump points the way. I finger the cat’s-head shaped coin purse I have tucked in my pocket, insert the coins in the machine. It’s my favorite, the Coke in small glass bottles, and it’s icy cold.

I can see the car heading across the desert, getting smaller as it heads toward Tucson on the way to California. Part of me wants it to keep going without me, but part of me wonders how long it will take Mom to notice or care that I’m not in the car.

“They’ll come back,” says the attendant, whose name patch identifies him as Eddie. “Not the first time a family’s driven off without somebody. There’s a chair inside, where it’s a little cooler.” Maybe he’ll adopt me, I think. He seems nice enough, and I much prefer his smell of gasoline and oil to Van’s smell of whisky and cigarettes. I sip the Coke and wish I had my book. I look longingly at the television set in the corner but Eddie doesn’t take the hint.

I don’t wear a watch, and have no idea how long I’ve been sitting here, my shorts-clad legs sticking to the vinyl chair and my hair damp against my neck. “Here they come,” points out Eddie, though the overloaded station wagon is hard to miss in the empty surroundings.

“Little shit,” Van grumbles as he opens the car door and lets me in. Mom is lighting a cigarette. Ellen is clutching her paper barf bag. Steve is trying not to laugh. I get in the car and crawl over the seats into the way back. I wave to Eddie as we pull back out on the highway.

Please let me know what you think! I’ll post more bits and pieces if you like them. I think the next one up might be Mom and Van’s wedding.

Peace and hugs from A Girl Named Little Shit. 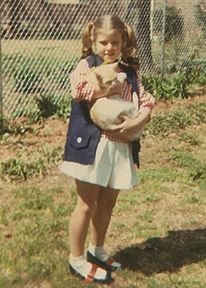