In music, it’s a  wonderful 1955 song called Something’s Gotta Give, with words and music by Johnny Mercer and famously sung by Frank Sinatra. 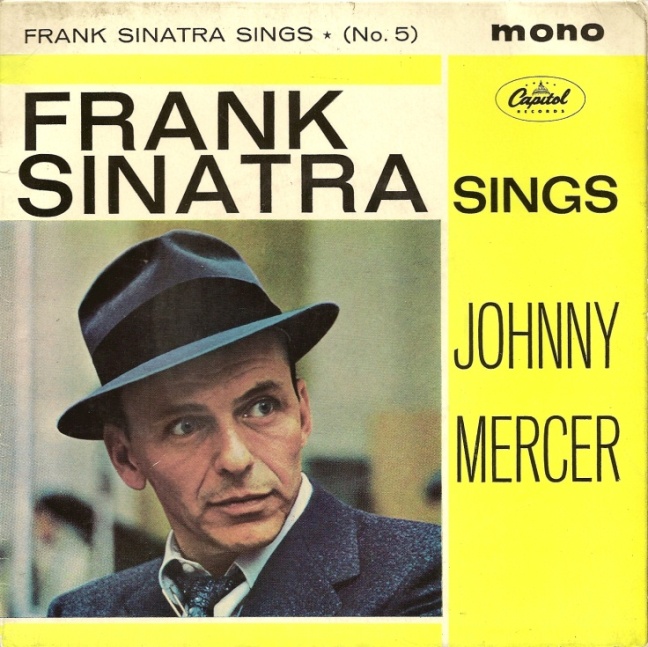 In my life, I am the unmovable force and a dog named Snuffalaffugus (a misspelling of the Sesame Street character’s name Snuffleupagus) is the irresistible force.

As many of you know, I work at Tony La Russa’s Animal Rescue Foundation (ARF). I am Proud to be a Crazy Cat Lady. I love dogs, yes. The world’s cutest dog lets me live in his house.

At the shelter, I am more comfortable over on the cat side than I am on the dog side. I love scruffy terriers, and if a dog remotely resembling a Cocker Spaniel arrives at the shelter, I immediately start singing songs from Lady and the Tramp.

Then along came Snuffalaffugus, who I call Snuffy. This 91-pound American Staffordshire Terrier (also known as the Amstaff or Stafford or by the more common pit bull terrier) mix does not look like a dog I would hang out with. I confess to a lingering fear of large dogs, especially the “bully breeds”. In short, I am afraid of pit bulls.

As an adoption counselor, I remain neutral on breeds and help potential adopters with whichever dog or cat they’d like to vist. The first time I was called on to show Snuffy, I went into an internal panic. But I pulled on my big girl panties, grabbed a leash, took a deep breath, and entered her kennel. And fell in love.

My first meeting with Snuffy. The irresistible force won. 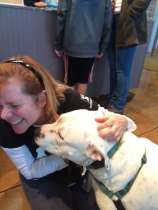 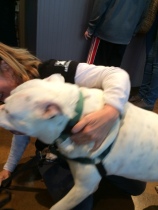 We were recently asked to submit photos to use on the Foundation’s organizational chart. A group of us decided to take each other’s pictures with ARF animals. I went against Cat Lady character and decided to pose with Snuffy. It took quite a few shots, but we finally got one with both of us sitting still. 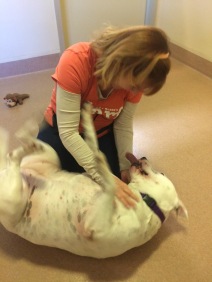 Now I spend every spare minute I have visiting Snuffy in her kennel, getting doggy kisses and singing to her. We both need to lose a few pounds, so I really should be out walking her around, but I prefer sitting on the floor while she tries to fit herself in my lap and knocks me over in her enthusiastic face licking frenzies.

Amstaffs are one of the several breeds referred to as pit bulls. Pit bulls have had a lot of bad publicity and have become subject to insidious breed restrictions. These restrictions make it harder to place loving dogs like Snuffy with good families. 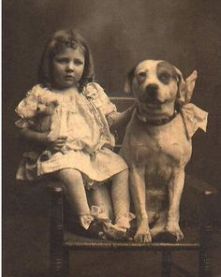 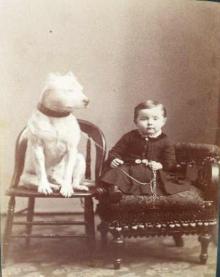 The classic early comedy short films from 1922 to 1944, Our Gang (The Little Rascals), featured the gang’s loyal companion Petey. Petey was, you guessed it, an American pit bull terrier. 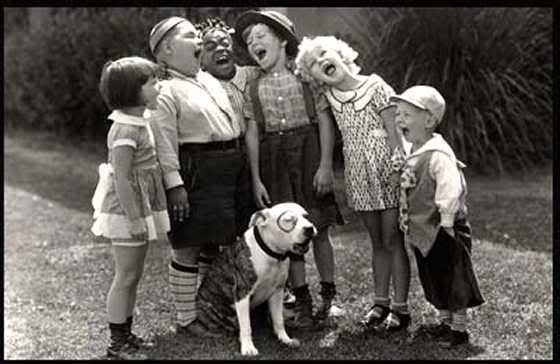 The RCA Victor dog is a pit. So is the dog from the Buster Brown stories and shoes.

So, what happened to lead us up to the days of stories like Michael Vick and his dog fighting pit? (I will not show the horrible images of the maimed dogs he is responsible for.)

The concept of pit bulls as Nanny Dogs may be a bit overstated, but the bad reputation of the dogs is something fairly recent. For reasons I don’t know and won’t investigate here, dog fighting rose in popularity in the 1980s and continues today. Pit bulls are incredibly strong dogs and super smart, meaning they are highly trainable. Which can mean trouble if the dog trainer has bad intentions. With the pit bull’s massive head and jaws, their bite can be deadly. In addition to fighting dogs, they have come to be seen by some as cheap, effective guard dogs. I prefer an alarm system myself. 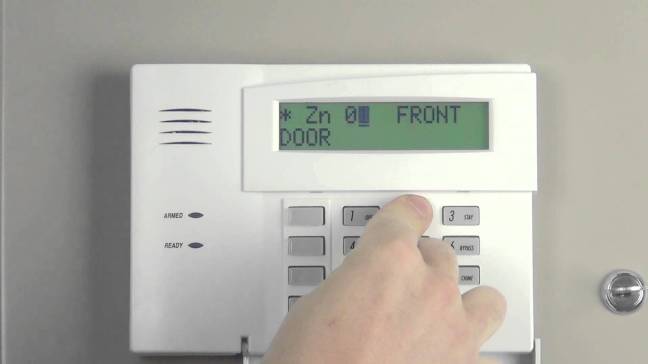 At the animal shelter, our aim is to place companion dogs in homes with loving families. Snuffy’s previous family was displaced by a house fire and had no choice but to relinquish their beloved dog to the shelter system. They loved her dearly. She was a member of their family. Now she is with us at ARF, and we will do our best to match her with guardians who understand her and will give her the love and exercise she needs.

You might ask why I don’t adopt her myself. One, I have a full house: Einstein, 3 cats, and a continuing rotation of foster cats. Two, I am at work full time, as is Bob. We aren’t able to provide Snuffy what she needs. Three, I want to see her make another family as happy as she makes me. It’s one of the rewards of my job. I can’t adopt each and every animal I fall in love with, but I can feel the joy of someone else falling in love. I get to be a part of something special.

Consider donating to or volunteering at your local shelter so they can continue saving lives like Snuffy’s and Einstein’s. Adopt, don’t shop. And spread the word for Snuffy and all the other animals who deserve better than the cards they’ve been dealt in life.

Maybe it started with Kermit the Frog, the iconic Muppet with a heart of green-gold.

I still watch The Muppet Show when I have a chance.

Or maybe it was our grandfather Papa, singing the folk song A Frog Went A-Courting to us when we were children. Although this wouldn’t explain my sister Ellen’s fear of frogs. Maybe that’s from Mom supposedly cooking frogs’ legs for Daddy and the legs jumping out of the pan. Mom swore this was true.

On You Tube I found versions by Bob Dylan, Bruce Springsteen, Woody Guthrie, Burl Ives, and a bunch of guys with guitars who I never heard of. But I think Pete Seeger is the closest I’m going to get to Papa.

There are some seriously stupid jokes about frogs. I like stupid jokes. Unfortunately, in many of them things don’t go well for the frog (you know, the word croak being the punchline).

Waiter, waiter, do you have frog legs?

No, I always walk this way.

What do stylish frogs wear?

A few years ago, I took a class called Phobease on dealing with phobias and anxieties. No, frogs weren’t on my list, though they are on Ellen’s. One of Dr. Fear’s (aka Dr. Howard Liebgold) sayings was “If you have to eat a frog, eat it first thing in the morning. If you have to eat two frogs, eat the ugliest one first.” I never liked this saying. I get it. If you have to do something that makes you anxious, just do it and get it over with, and do the hardest first. But I felt bad for that poor so-called ugly frog. At the end of the class, Dr. Fear handed out little plastic frogs to all of us. I still have mine.

I recently spent a week in Maine at the Institute for Humane Education in Surry with a group of my fellow Humane Education students. It was there that my love for frogs was finally made clear. I don’t sleep well away from home, especially if I get in the habit of drinking coffee during the day. And if I’m anxious. Which I was.

Not wanting to wake my cabin mates (did I mention we all stayed in a bunkhouse together? I’m finally headed to summer camp…) I found myself out of doors in the early hours of the morning down at the pond.

I am not particularly an outdoorsy person, and going barefoot is one of my phobias. But there I’d be at 5 a.m. in the damp, on the dock, watching and listening at the pond.

I don’t mediatate either; I always feel like my hyperactive brain sabotages me. But I could easily spend an hour or more in the early morning sitting on the dock listening to the frogs.

(I don’t know how to embed the videos I took, so this sound clip from You Tube will suffice.)

I was curious if there were any poems about frogs, particularly American, New-Englandy style ones. And lo’ and behold, Robert Frost wrote a poem called Hyla Brook. (Hyla is the genus of the small green tree frog.)

I also decided to search for frog sounds on iTunes. I am not the only one who loves the sound of frogs! 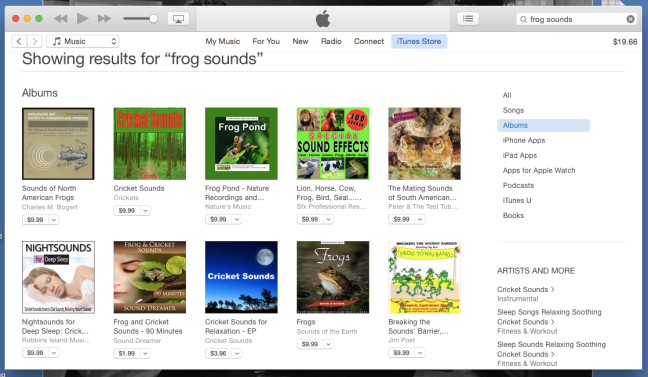 I’m considering forking over $9.99 for this one.

I can play the sounds while I do the next best thing to pond meditating, which is spending time with the animals who share a home with me.

Of course, I have no idea how Einstein and Misty will react to the frog sounds. It might not be as calming for them as it is for me.

Maybe they’ll prefer this selection: Hair of the Frog by Three Weird Sisters. And don’t get me started again on the whole “three sisters” thing! A Tale of Three Sisters