When I applied to a Ph.D. program on an impulse last summer, I knew my life would be busy, but I didn’t realize just how busy. Call me a cock-eyed optimist, but I thought, sure, I can go to school full time while working full time. It hasn’t been the easiest thing I ever decided to do, and I have many more semesters to go. But having now submitted my last paper for the first semester (YAY), I can look back and reflect on just how crazy the last few months have been.

One of my first moves was to get a big dry-erase calendar to organize my life. I hung it, planned out the semester, and then pretty much ignored it until today, when I am wiping it clean for next semester.

As would be expected in any doctoral program, books are involved. Lots of books. Some I really enjoyed. Some I struggled with. And I faced the reality that I have to pick and choose what to read; I can’t read it all. Or I’m going to have to take a speed-reading class. 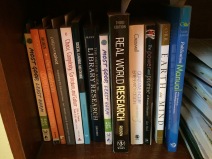 My dictionary stays open to the “h” pages–I can’t remember the definitions of heuristic and hermeneutics to save my life. 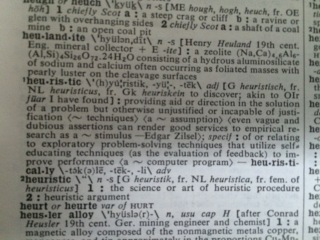 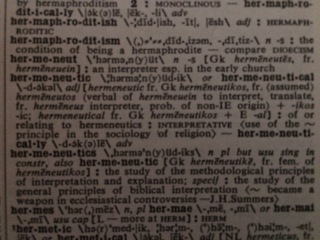 I did have to change some things in my daily routine. My obsession with making the bed every morning is a thing of the past, I hate to say (sorry, Mom). As much as I like to do laundry, the laundry room is now the least visited room in the house.

We might not ever eat homemade meals if not for the Purple Carrot. Similar to Blue Apron or Hello Fresh!, it’s a service that ships the ingredients and recipes for 3 meals a week. Purple Carrot happens to be vegan, and has the caché of having Mark Bittman on the team.

Of course, we do end up eating on tv trays in front of television most of the time. But that’s not new.

Have I mentioned coffee? There’s a lot of coffee in my life. Funny thing. it’s mostly decaf, but still gotta have it!

I have managed to have some fun down time. Maybe that’s why I scramble to get my papers in on time, but my idea of fun down time is going out on marches and protests, and I think of those as a part of my humane education program. As my friend and fellow future Ph.D. Suzy Fisher says, don’t just talk the talk, walk the walk.

A trip to Chicago was one of the highlights of autumn for me. I got to live my Ferris Bueller moment at the Art Institute of Chicago and attend a wonderful concert by the National Brass Ensemble, thanks to the generosity of world’s best boyfriend and amazing brass player Robert Ward.

There’s always room for food in my life, maybe too much so sometimes, and cooking classes are a great way to spend the spare time I don’t have.

I bake for the monthly bake sales held to benefit animal sanctuaries by the Berkeley Organization for the Advocacy of Animals at UC Berkeley.

I continued to volunteer for East Bay SPCA. It’s because of my experience there with the animals that I am on this path, so I can’t give that up! And I’ve added fostering onto the list of things I do. Our guest bathroom has been turned into a foster cat habitat.

During all of this, work was chaotic too! The University of California, Berkeley Art Museum and Pacific Film Archive moved into a new building. Moving is never easy unless you have truckloads of money to pay someone else to do it while you go on vacation. 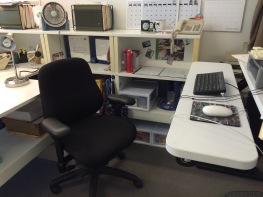 I had a wonderful time volunteering at the Western Museums Association 2015 Annual Meeting in San Jose.

At the Fairmont in San Jose

And just when I got settled into a new office and a new neighborhood, I found a wonderful opportunity to work at the Jan Shrem and Maria Manetti Shrem Museum of Art at UC Davis. Let the commuting begin! Only it didn’t begin so well. My car should be done at the MINI service center soon. 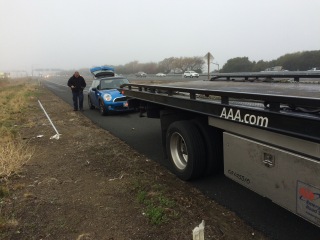 Ask me how I’m doing:

One day it will all be worth it: I will be one of the new Doctors of Philosophy getting to wear the coveted sash.

I couldn’t be doing any of this without the love and support of aforementioned Robert Ward. Thank you!

And for any possible naysayers out there (thankfully that would not be any of my friends or family), I will leave you with the wise words of Harold. Please excuse his language.

The Jan Shrem and Maria Manetti Shrem Museum is under construction (yes, another new museum in my life) and it’s going to be fabulous!

Until construction is further along, the museum administrative offices are in Nelson Hall. The Nelson Gallery is closed as of June 2015. The building used to be the University Club for faculty and staff. I remember thinking, back in my student days, that it was a building I would never enter, but now I am working there! Life is strange. It’s a sort of funky building but it’s in a beautiful setting.

My desk set-up is temporary, but it will do!

Of course, it being the UC system, there is lots of paperwork to do before I can actually start working. I spent the morning at the Shared Services office getting my HR paperwork going. They were very welcoming.

Then I had to go get fingerprinted at the campus police department, so I took a detour around campus to see how much I remembered and how much things had changed. It felt the same but different.

Leaving Nelson Hall toward the Arboretum, there is a great section of sidewalk art, featuring underwater creatures.

I headed through the Arboretum, which looks lovely this time of year, although the water is a bit on the green side. But the recent rains should help freshen things up. 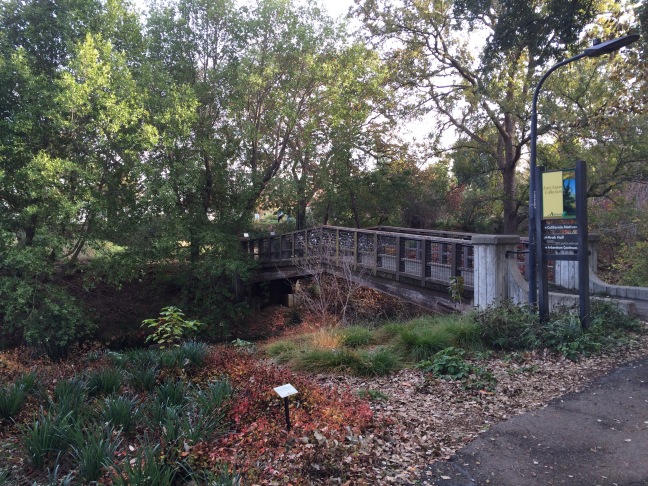 Mrak Hall will probably never change. And one of the Robert Arneson Eggheads keeps faithful watch. 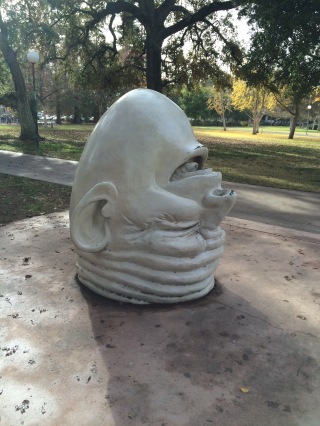 One of my favorite spots on campus from my day is still the same–the wisteria arbor  between Mrak Hall and Lake Spafford. Not the time of year for flowers, but come spring it will be a riot of lavender blossoms. 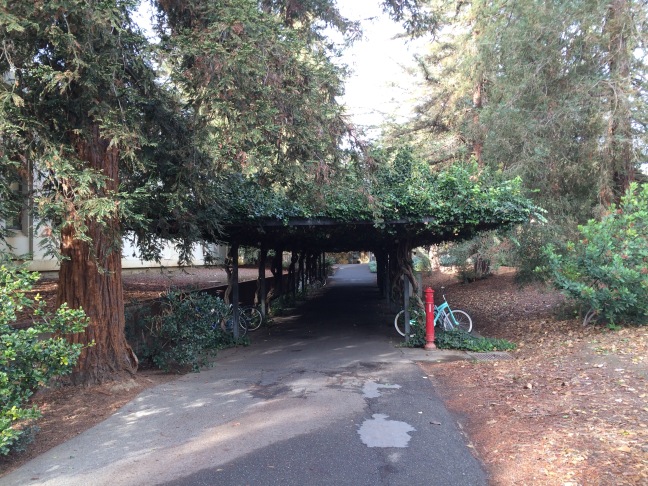 Ah, Everson Hall, where I spent 2 years in graduate school in the textiles department. Talk about something that hasn’t changed! 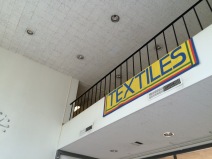 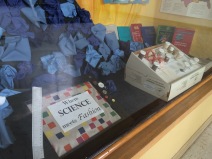 The Art Department is across the way. It seems like it should be one of the more colorful and interesting buildings, but as you can see, it’s not. When I was a workstudy student at the Nelson Gallery in the 80s, it was in the Art Department on the first floor.

These sculptures on the grounds are strong in my memory, too.

Shields Library was newly remodeled during my student days, and I still think it’s a nice building.

And we can’t talk about UC Davis without mentioning the ubiquitous bicycles. Yes, they are everywhere. 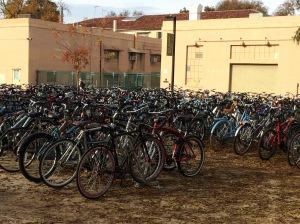 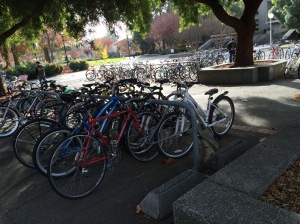 Walker Hall was where I spent a lot of my time as an undergraduate. It was the Design Department then; I’m not sure what goes on there now but it’s a lovelier spot than I remembered.

Next stop: the quad. The only thing that really looks different is the addition of the hammocks, which I am in favor of. The world needs more hammocks.

For the record, and risking an argument with the Squirrels of Berkeley fans, I think the squirrels at UC Davis are fatter, healthier, and generally more courteous.

Student radio is alive and well at UC Davis. Offices at Freeborn Hall.

But where are the students, you might ask after seeing all of these pictures. I was thinking the same thing. I finally found them at, of course, the Coffee House!

The Coffee House now is much more sparkly and upscale than it was in my student days. But they kept some of the old touches, like the coffee cup sign and the stained glass, from when it was on the other side of the student union in a much smaller space.

That concludes today’s tour of my UC Davis. Come visit me if you are in the area! If I’m not in my office, I think you know where to find me. Hint: coffee.