I returned to my old neighborhood at UC Berkeley today. I don’t get to campus very often since I left my job at the Berkeley Art Museum and Pacific Film Archive (BAMPFA) last December. But I was lured back by the Greater Good Science Center, of which I have been a member for a couple of years now. Taking their Science of Happiness MOOC (massive open online course) in September, 2014,  was a life-changing experience. I highly recommend it. The next offering begins September 6 this year.

The Science of Happiness

According to the program notes for my adventure today, a “day of cutting-edge research and awe-inspiring performances”, the event “marks the culmination of an unprecedented three-year project to advance the scientific study of awe, conducted by Dacher Keltner’s Berkeley Social Interaction Laboratory and funded by the John Templeton Foundation”. Sounded like a worthwhile way to spend a Saturday to me!

The Art and Science of Awe

Off I headed to the Zellerbach Playhouse, a smaller (yet to me, nicer) annex to the big Zellerbach Hall that is the home of Cal Performances.

Ever since I took “The Science of Happiness”, I’m kind of a Dacher Keltner groupie. UC Berkeley psychology professor Dr. Keltner is the founding director of the Greater Good Science Center. He gave the morning keynote, “What Is Awe and Why Does It Matter”, getting us off to a great start. (I am trying not to use the word awesome. And I apologize for the “save” box on the portraits; that happened when I screen shot the images somehow and I am not going to redo them!)

What is awe, you ask? Keltner defines it as “being in the presence of something vast, beyond current understanding”.

Lest you think this will get too serious, the discussion even included designing better emoticons with an artist from Pixar.

And why study awe? Because awe might provide the counterpoint to what many of us see as a current cultural malaise.

Next up was arguably the crowd favorite, a participatory music session led by the amazing Melanie DeMore. Okay, I normally balk at sing-alongs and participatory anything, but I let myself be open to this and it was so much fun, and moving as well. I had a tear (or two) in my eye at the end. Melanie DeMore is a vocal artist and activist and is a natural teacher and mentor, if this session was anything to judge by. She had me singing and clapping and swaying at 9:30 on a Saturday morning before I’d even had coffee. Unanimous standing ovation from the audience. 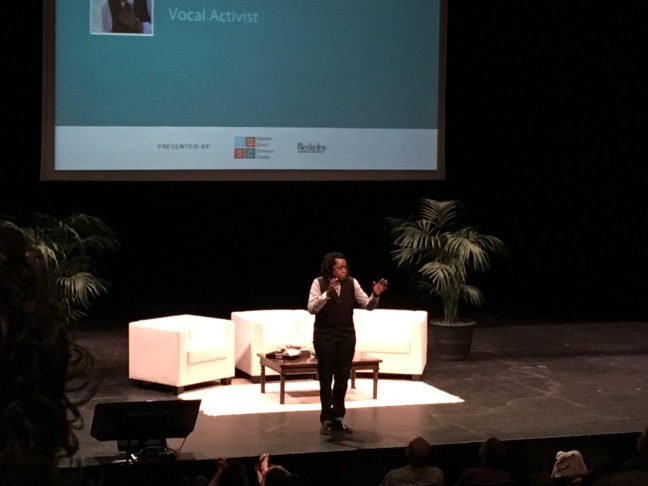 Then followed the first panel of the day (the members of which acknowledged humorously that Melanie was a hard act to follow): “Nurturing Awe: How Awe Can Be Fostered Through Education”. Moderator Vicki Zakrewski, Ph.D, moderated the discussion, with presentations from high school teacher Julie Mann and Tom Rockwell, Director of Exhibits and Social Media at the Exploratorium in San Francisco. 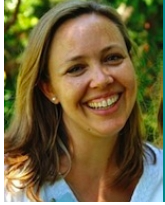 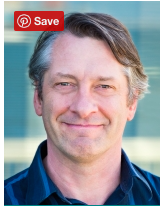 Julie Mann teaches at Newcomers High School in Queens, where 100% of the students are ESL students. As hard as awe as a concept is to describe, she asked us to imagine describing awe in a language you are learning as an immigrant. “You have to experience awe to understand it” so she works with her students to provide them the experience as well as the tools to describe it.

Tom Rockwell talked about how they approach exhibits at the Exploratorium in an effort to provoke wonder and curiosity and questions, not to provide the answers. He also talked about the concept of wonder and how it relates to awe. 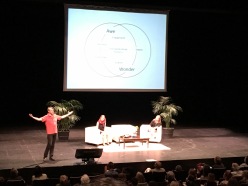 Break time, and the search for coffee, one of the magical things that instills awe in me. 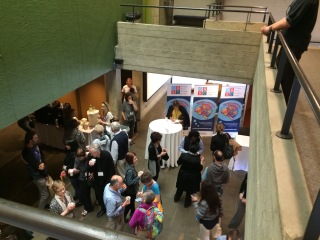 The next panel, “Natural Elevation: The Therapeutic Benefits of Experiencing Awe in Nature”, was led by moderator Emiliana Simon-Thomas, Ph.D, and included presentations from Craig Anderson, Ph.D. (UC Berkeley), Stacy Bare (Director, Sierra Club Outdoors), and Jaclyn Lim, who as a teenager participated in a collaborative study between UC Berkeley and the Sierra Club that looked at the mental and physical health benefits of experiences in nature for underserved adolescents and military veterans. 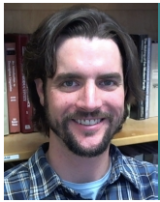 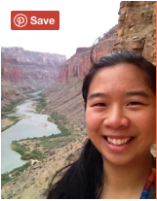 Even Golden State Warriors basketball superhero Steph Curry made it into the discussion, as he apparently has a very expressive face for comparisons of facial expressions and emotions.

The morning wrapped up with poetry readings by former US Poet Laureate, National Book Award and Pulitzer Prize winner, and UC Berkeley professor Robert Hass. I would have loved to take a class from this warm, engaging gentleman. I felt awe in his presence.

The afternoon started with the super high-energy and voluble Jason Silva, host of National Geographic’s “Brain Games” and maker of the short film series “Shots of Awe”, in conversation with Dacher Keltner on “Our Responsibility to Awe”.

To be honest, he was talking so fast about so many things with such animation that I lost track! As someone who feels inarticulate much of the time, this did produce a sense of awe in me.

The afternoon keynote, “What’s Awe Got To Do With It?: How Awe Changes Our Minds and Bodies” was delivered by Michelle “Lani” Shiota, PH.D, of Arizona State University. 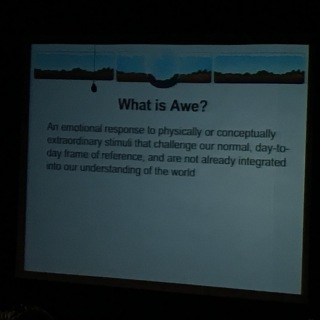 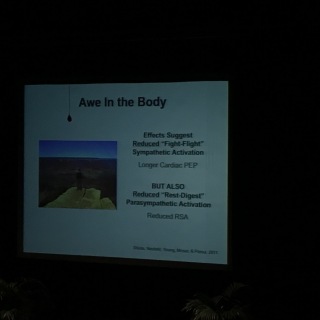 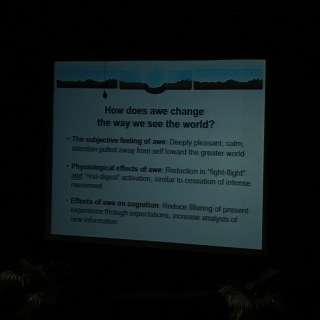 Post afternoon break, we again were introduced to awe through music, with beautiful sounds of the Chinese stringed instrument the pipa, played by Wu Man. Haunting, mesmerizing, and meditative all at the same time. 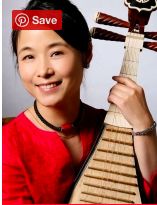 Wu Man then joined the panel on “Evoking Awe Through Art”, moderated by Director of Cal Performances Matias Tarnopolsky and with presentations by husband and wife team Ben Davis and Vanessa Inn (Illuminate the Arts) and David Delgado (NASA Visual Strategist and co-founder of the Museum of Awe). 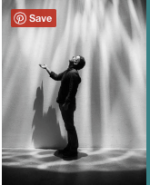 Illuminate the Arts is a light-based arts project that teamed with artist Leo Villareal to create the The Bay Lights, making the Bay Bridge into San Francisco a “canvas of light”. 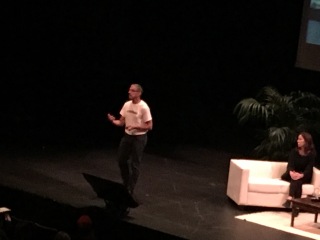 David Delgado “develops experiences that provoke curiosity through a mix of science and imagination”, such as Metamorphosis, a sculptural depiction of a meteor that allows people the experience of walking through the tail of a comet.

Emiliana Simon-Thomas led another panel on the topic of “Awe and the Greater Good: How Awe Can Inspire–and Be Inspired by–Acts of Altruism and Moral Courage”. 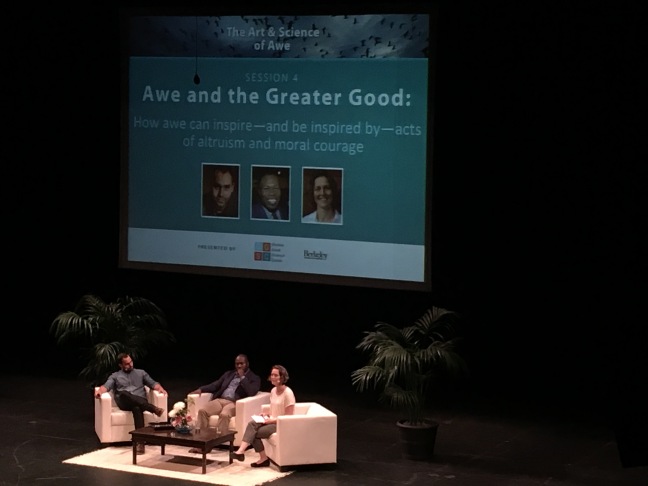 Presenter Paul Piff, Ph.D., of UC Irvine, spoke about whether the experience of awe attenuates narcissism, entitlement, and self-interest (no surprise to me, he found that the people who are the most well-off also feel the highest sense of entitlement and are  less generous).

Covering the concept of moral courage was Jakada Imani from the Center for Popular Democracy (and former Executive Director of the Ella Baker Center for Human Rights) with a profile of the Reverand Dr. Martin Luther King Junior, and how he ended up the path to altriusm and moral courage.

The final panel of the day, “Global Awe: Finding Awe Around the World and Across the Universe”, brought back Dacher Keltner with Jennifer Stellar, Ph.D., of the University of Toronto, and astronomer Alex Filippenko, Ph.D, professor at UC Berkeley (and nine-time Professor of the Year). 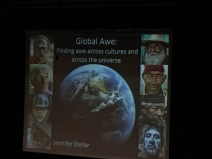 Jennifer Stellar talked about how awe varies across cultures and what about it is universal.

Alex Filippenko, as the astronomer, went the universal route, invoking Albert Einstein and mostly talking over this humanities/arts/humane education person’s head. The crowd was generally more physics friendly, as far as I could tell, since they laughed and seemed enthralled and entertained. This kind of intelligene does invoke awe for me even if I don’t understand what’s being discussed! 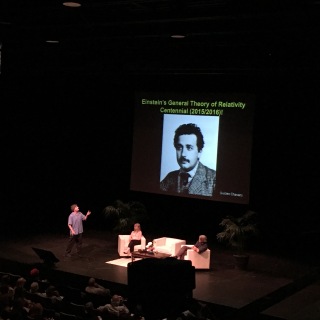 Dacher Keltner closed with remarks about how the life’s work for each presenter beagn with awe and wonder, and after the standing ovation, everyone went out to the annoying but ear-worm inducing sounds of the song “Everything is Awesome” from “The Lego Movie”.

I had to get that out of my head, so I drove home to the sound of Lee Horsley reading Larry McMurtry’s Pulitzer prize-winning book “Lonesome Dove”. That, my friends, is truly awesome. 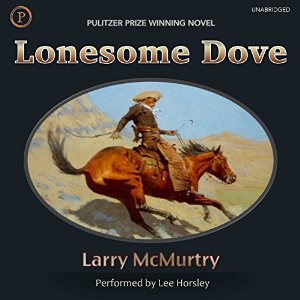