I can’t believe it’s been something like 8 months since I’ve posted anything. Lots has been going on, but I’ve been more about making things with my hands than writing about life’s adventures. I am back in a writing mode for a while now, as I started the daily battle called NaNoWriMo (National Novel Writing Month) for November. 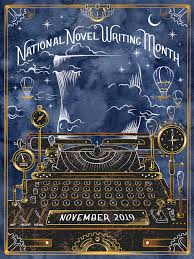 So far I am over 10,000 words in to my first draft of the long-threatened “Little Shit” memoir (fictionalized memoir? autobiographical fiction?) that now has the working title Crazy Cat Girl, probably an easier sell than Little Shit.

Will I ever finish the book? Do I ever finish anything? All of my impossible dreams, me as Dona (Doña?) Quixote, fighting those windmills. 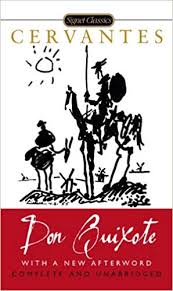 Did you know that there was a female Don Quixote? In 1752, Charlotte Lennox published The Female Quixote; or, The Adventures of Arabella. Wow people with that the next time you need dinner party conversation. 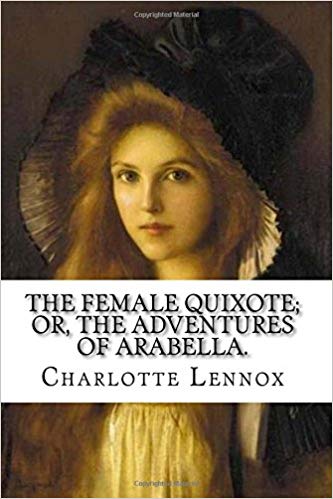 2019 has been my year of being Arabella. I started French lessons at the local adult school. Gave up when it got too hard (aka, I didn’t have time to study). Windmills 1, Arabella 0.

We foster failed again. Gorgeous, shy, sweet polydactyl Butterscotch came to us to recover from a head injury earlier in the year, and has been granted permanent resident status. He and the now grown-up Pugcat are quite the best friends. I don’t know who gets the win; I think Arabella in this case.

I might have gotten over my fear of it hurting and entered the world of tattoos. Pugcat now lives in portrait form on my left arm. (I have yet to get good images of the actual tattoo, mainly because I think my arm looks fat in all of the photos.)

We didn’t get a summer vacation this year, but I did get to the Thomas Wolfe Society meeting, in Gettysburg, Pennsylvania. 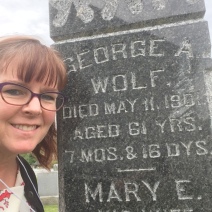 Gettysburg, a lovely place, was quite the eye-opening experience. As a result, we ended up watching the PBS/Ken Burns documentary The Civil War. I learned so much about this country that I didn’t know. It was very moving, heart-wrenching in all honesty.

I also was honored to be selected to attend the Animals and Society Institute’s summer program at the University of Illinois (Urbana-Champaign) Center for Advanced Study. Over 20 animal studies doctoral students and recent PhDs spent a week with incredible mentors, workshopping our projects and making new friends. Including some animal ones, like the goats we visited, or the tarantula who visited us. My first visit to the mid-West, where it was hot and humid and I relearned the joy of lying in the grass under a shady tree. 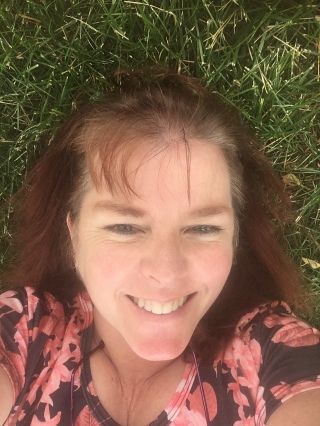 The down side was living in the dormitories. Let’s just say, I’m too old and private for dormitory life.

Here is where Arabella comes in. I was so inspired by my week of studies that I rewrote my dissertation proposal, which is essentially the first 3 chapters of the dissertation. I had been through several drafts, none of which got through my committee. I was very excited about the new version, and my committee chair seemed to be, too. But I got shot down again. Pesky windmills, forever winning the battles. After a cooling down period (I do get angry sometimes),  I dropped out of school. Well, I withdrew from Saybrook with the intention of finding  spot at another university to finish my dissertation. I have high hopes for a place at Antioch University next year. So Arabella is still in the fight on this one. Charlotte Lennox did give her two volumes, after all.

But what’s really thrown me for a loop this year was the loss of a beloved litter of foster kittens. Mother cat Leah and her babies came to us when the babies were only 2 days old. 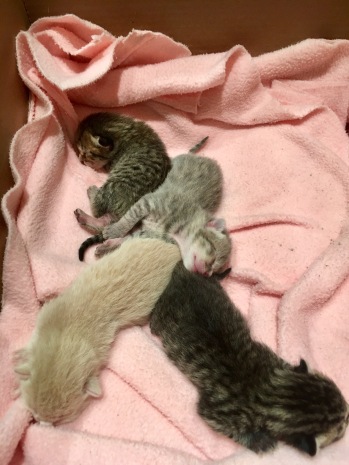 The kittens all had names starting with L (Liam, Linus, Lily, I forget). We renamed them. I couldn’t keep the L names straight. We named them after writers: Jules (Verne), Toni (Morrison), Willa (Cather), and Ernest (Hemingway).

Leah was a wonderful mother. The babies grew strong and healthy, keeping us entertained with their antics and enthralled with their daily changes. 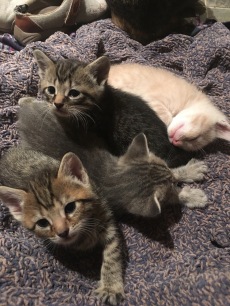 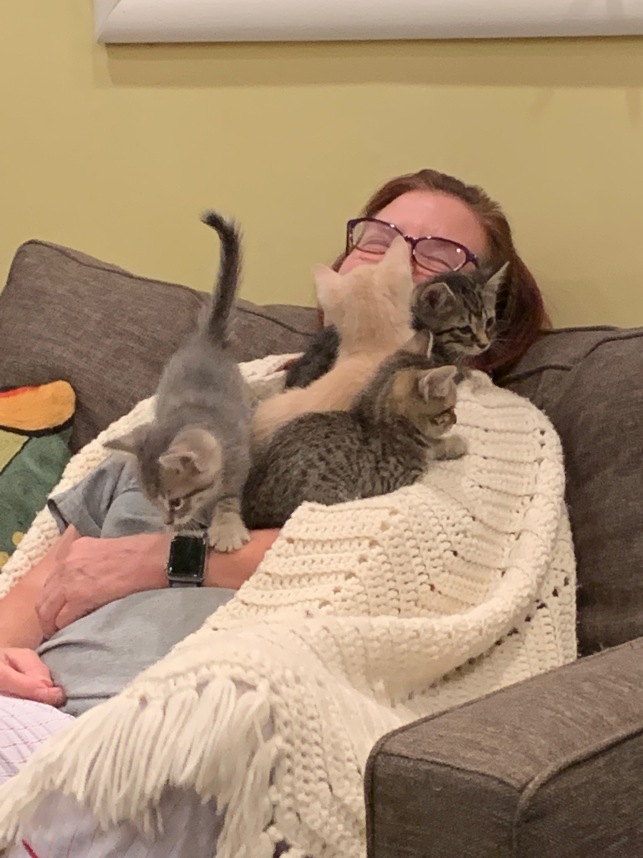 They seemed well on their way to wonderful lives. And then a giant, evil windmill called panleukopenia virus stepped in and devasted us when the kittens were about 7 weeks old. Kittens are fragile, and their mortality rate is higher than you might think. Our hearts were broken when the decision was made to humanely euthanize the suffering babies. On a brighter note, mother Leah is fine and has been adopted.

We grieve. I am just at the point of writing about it, partly because as I do my daily writing for NaNoWriMo, I realize there is so much I am still working through from my life, including grieving for what seemed like the loss of childhood and for my mother, who has been gone for 10 years now.

I had been throwing myself into art projects. One of my favorite places on earth these days is Etui, at 2518 San Pablo Avenue in Berkeley. I would take every single class offered there if I could, and sleep in the shop in between! Plus owners/teachers Alice Armstrong and Bethany Carlson Mann, are 2 of my favorite people!

I started a tunnel book project in memory of the 4 kittens. While it can get me emotional, that’s not a bad thing, and I am in a group of incredibly supportive and loving people in the Books, Boxes, and More class. I haven’t completely finished the book, and it’s hard to photograph, but the making of it has been surprisingly healing. 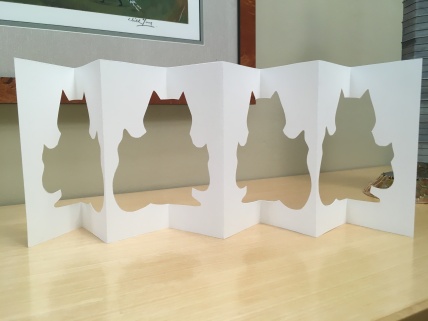 Some other fun art projects I’ve started and actually finished this year include my first attempt at basketry, wax flower crowns, and crepe paper fruits and flowers (quince fruit box pictured below). I find making things with my hands, whether it’s art, crafts, food, whatever, very therapeutic. Expensive hobbies, but maybe cheaper than therapy? Maybe…

But I am not letting the panleukopenia derail our fostering more than necessary. For a while, we can only foster adult cats with vaccinations and healthy immune systems (in case any of the evil panleuk virus lurks in unseen places in the house). Meet Daisy, our 8-year old house guest who needed a break from shelter life!

Is there a lesson in all of this? Keep your head up. Keep following your dreams. And if I’ve left you with the Robert Goulet version of the Man of La Mancha song Impossible Dream, which I mainly remember from the Jerry Lewis yearly muscular dystrophy telethons, my sincerest apologies.

Believe me, there are endless versions of this song available. But if I am going to make this up to you all, I need to leave you with a truly good one. I love Tom Jones, I used to wish Andy Williams was my dad, Brian Stokes Mitchell won a Tony for his performance, you can never beat Frank Sinatra, I love the idea of a Liberace version, but it’s really hard to find a version that isn’t cheesy, overly dramatic, or just plain icky. I am partial to this rendition by the late Glen Campbell, who I’ve developed a new appreciation for in the last few years.

To dream the impossible dream,
To fight the unbeatable foe,
To bear with unbearable sorrow,
To run where the brave dare not go.

To right the unrightable wrong,
To love pure and chaste from afar,
To try when your arms are too weary,
To reach the unreachable star.

To fight for the right
Without question or pause,
To be willing to march
Into hell for a heavenly cause.

And I know if I’ll only be true
To this glorious quest
That my heart will be peaceful and calm
When I’m laid to my rest.

And the world will be better for this,
That one man scorned and covered with scars
Still strove with his last ounce of courage.
To fight the unbeatable foe.
To reach the unreachable star.

Get out there, battle those windmills, make the world a better place!
Peace and hugs.