Christmas time is here…and I love the holidays. The carols, the decorations, the over-the-top store displays, the Hallmark Channel movies–I love all of it. As I’ve gotten older, I don’t do as much myself. Our Christmas tree is still outside in a bucket waiting for us to have time to bring it inside. I haven’t done any shopping. But I still love to soak it all in wherever I go. I have Pandora on the James Taylor Holiday Channel, from which I’ve realized I actually like singers Josh Groban and Michael Buble (yes, Cathy and Ellen, you told me so).

Like so much of what happens around me anymore, the atmosphere has launched a bit of nostalgia and longing for the Christmas of my childhood. So much excitement! Such specific rituals we followed, and the slow pace that kept an anxious kid like me all pent up, but in a good way. My mother always made us each a special outfit for Christmas day. I specifically remember a red velvet top with a lace collar and pants to match that I wish I still had (in my current size) and a pink velvet midi-dress festooned with pink satin ribbons. I did go through a serious pink phase. And apparently a velvet one, too.

Oh, the wishes for such treasures as a Lite-Bright and an Easy-Bake Oven, which were never met.

Or the ones I did get that I wanted so badly. Like the Beautiful Crissy Growing Hair Doll. I loved Crissy so. She had a push-button on her tummy that you could use to wind up her hair to be short or pull it out to be long. As my own hair is always transitioning from long to short or short to long, I was fascinated by this insto-chango approach to hair.

This is where things are going to take a weird turn. Around about 1970 or so, I really wanted a ventriloquist dummy for Christmas. I found one in the toy section of some department store catalog and made sure everyone knew that was what I wanted.

You know the 1966 book A Christmas Story by Jean Shepherd, made into the popular 1983 film of the same name?

All Ralphie Parker wants is a Red Ryder Carbine Action 200-shot Range Model air rifle. Set in 1940 in Indiana, the story of Ralphie and his friends Flick and Schwartz and his attempts to evade the bullies Scut Farkus and Grover Dill and Ralphie’s efforts to convince all of the adults in his life that an air rifle is a great idea and that he won’t shoot his eye out. At the end, Ralphie gets his Red Ryder, and remarks that it was the best Christmas ever.

Enter me as Ralphie and Danny O’Day as my Red Ryder. The fact that I even wanted a ventriloquist dummy is very strange. I am afraid of clowns and killer Chucky-style dolls. I watched way too much of The Twilight Zone when I was up past my bedtime. There are 2 episodes that feature evil ventriloquist dummies: The Dummy and Caesar and Me. Then there’s a movie I vaguely remember with a mentally disturbed girl and the dolls and stuffed animals in her room that talk to her. They don’t say happy things. Or maybe that was The Twilight Zone, too. No, wait, the Twilight Zone with the murderous doll is the called Living Doll, featuring Talky Tina. This is the stuff of my nightmares.

Again, what made me think I wanted Danny O’Day? Did I think I might have talent as a ventriloquist? Well, I got Danny O’Day, and it was NOT the best Christmas ever. I unwrapped the package, I opened the box, and I screamed. At least I think I did. I know I wanted to. But I dutifully spent the day pretending I loved Danny (who I renamed Charlie) and trying my best to follow the instructions on ventriloquism that came with him. I had no apparent talent for it. And then it was bedtime. I left Charlie in the living room, under the Christmas tree. And stayed awake all night positive that he was going to creep down the hall to my bedroom and kill me if I went to sleep.

He didn’t look that evil. If you start online searching for images of ventriloquist dummies, there are many much creepier examples. 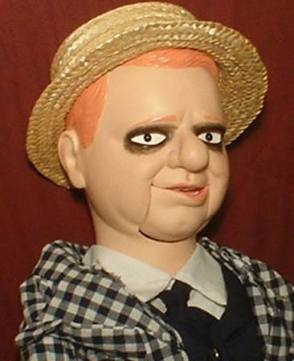 Maybe it was his evil influence over me, but I surprisingly kept Charlie for years. We moved cross-country. We moved several more times. I went to college. I got married. And I still had Charlie. I kept him packed in a trunk (yes, that’s what the idiot humans in all the scary shows do, too, and it doesn’t work), sure he was going to get out eventually.

I had other scares, like the time I was home alone watching television and the trailer for the movie Magic (1978) came on. I turned my head and closed my eyes and tried to block it out. The mute button hadn’t been invented yet, and somehow it didn’t occur to me to immediately change the channel. Charlie-fear reared its evil, ugly head. The film is based on a book written by William Golding (author of Lord of the Flies; that doesn’t go too well for the characters either). Golding also wrote the screenplay. It starred Anthony Hopkins “as a ventriloquist at the mercy of his vicious dummy”. 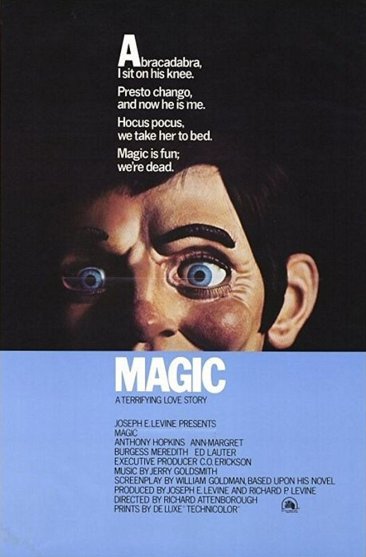 Yes, I was 17 and home alone for the night, except for Charlie in the trunk, watching television when this came on. Yippee. Needless to say, it was another long, sleepless night.

I did eventually manage to give Charlie away. I am not sure the child who was visiting us  and who thought Charlie was cool really wanted him, but I pretty much gave him no choice but to take Charlie with him. I’ve worried about that child, now a grown man, ever since. Charlie was moved to Turkey with his new person. You might imagine I felt safe. You would be discounting my overactive imagination. The film reel plays out in my mind of Charlie crawling out of his hole, finding his way onto an ocean liner, making his way eventually back to California, and appearing in my doorway, ready for revenge.

Of course I know this won’t happen. It would be silly for a 56-year old woman to hold a lingering childhood fear for a doll who, let’s face it, is a silly looking piece of plastic wearing bad clothes. Honestly, Beautiful Crissy could be said to be just as creepy as Danny O’Day. But still…

Summer before last I went to Maine to attend a week-long residency at the Institute for Humane Education. I was also taking a couple of humane education courses that summer, so I took one of the assigned readings with me to Maine. There I am in a cabin in the woods in the middle of nowhere, and I take out this book, Consuming Kids: Protecting Our Children from the Onslaught of Marketing and Advertising, by Susan Linn. Sounds innocent enough, and about a noteworthy topic. As I tend to do when I start a book, instead of jumping right in, I decided to read about the author. OMG, Susan Linn is a VENTRILOQUIST (an award-winning ventriloquist, no less) who uses puppets as therapeutic tools with childen. At first I laughed at the idea, then I got the creeps. I’m sorry, if I went to a therapist who turned out to be a ventriloquist, I would end up needing a lot (A LOT) more therapy! I couldn’t read the book. Again, I was in a cabin in the woods in Maine, scene of lots of teen slasher movies. I didn’t sleep all week. That might have been the massive amounts of caffeine and taking showers at 3 a.m. because there 14 of us sharing 1 bathroom, but Susan Linn, Ed.D., ventriloquist/child psychologist didn’t help me any. (Note: I don’t mean to belittle her work in children’s therapy, really.)

Now that I’ve turned Christmas into something totally macabre, let’s go back to happy thoughts. I did finally get that Easy-Bake Oven as a 50th birthday gift from Bob. Thank you! 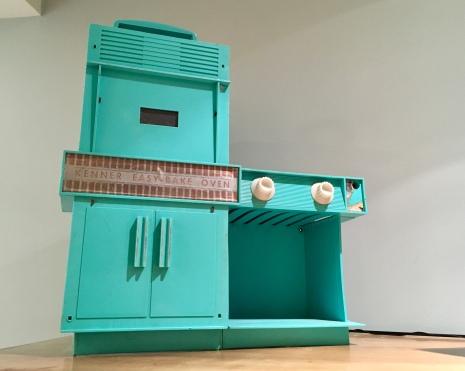 Maybe some day I’ll get that Lite-Brite.

My wishes this year are simple yet complicated: happiness, joy, kindness, peace…beautiful words, easier said than done. Going back to another childhood Christmas memory, I like to remind myself of the message of A Charlie Brown Christmas, about the spirit of the holiday not being in all of the things and wrappings and show, but in the love, peace, and care we take in ourselves, our loved ones, and the world around us.

I also reread the Dickens classic A Christmas Carol (1843) every year, following Ebenezer Scrooge as he opens his formerly greedy and cold heart to the world around him. If you don’t want to delve into Dickens, there’s always How the Grinch Stole Christmas. Same idea.

I’ve posted this video clip before, but it’s become a classic since it was first televised in 1977 and merits reposting. I remember watching it at the time (1977) on the yearly Bing Crosby Christmas special and finding it so beautiful. It still is. It’s not just in the voices, or the melding of two seemingly very different men, from different countries and different generations. It’s in the love and longing for peace.

You can’t go to the store and buy these things. You can’t wrap them up and put them under a tree. But we can give them to each other easily and freely, and we will all sleep better.

Peace, hugs, and have the happiest of holidays. 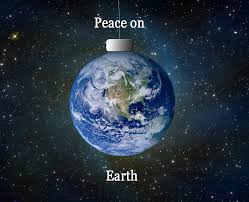