Happy International Cat Day! I don’t know who decides these things, and it’s always cat day in my world, but today we celebrate cats.

I have been volunteering at the East Bay SPCA in Oakland, California since 2009. It was a time of much personal turmoil. My mother had just passed away after a battle with cancer; I had been spending much of my time up in Sacramento with her and I suddenly felt like I had way too much time on my hands when she was gone. I had been thinking of volunteering for a while, either in a library setting or doing something with animals. We were at the yearly Solano Stroll street fair in Berkeley and a friendly volunteer at the East Bay SPCA’s booth handed me a flyer; it seemed like a sign. It’s been almost 6 years ago that I went to a volunteer orientation and it’s the best decision I ever made! 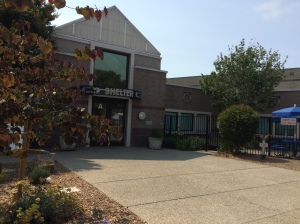 I started as a cat socializer, and over time have trained as a canine companion (dog walker), adoption counselor, volunteer mentor, lead off-site event volunteer, co-taught the cat volunteer training, and am now a customer care volunteer. I spend my Saturdays helping people coming in to find their match (both cats and dogs) and facilitate the adoption process. And when it’s slow, I still socialize with the kitties and pups.

Today, for International Cat Day, I’m taking a look at a typical Saturday with the cats at the shelter. The East Bay SPCA was founded in 1874 and as an independent nonprofit is not affiliated with any other SPCA. With adoption centers, education centers, spay/neuter centers in both Oakland and Dublin and a full-service veterinary clinic in Oakland, the EBSPCA currently utilizes the services of about 375 volunteers.

Today when I arrived at the Oakland adoption center, there were 31 cats available for adoption and many more in the back holding area awaiting behavior and/or health checks and other procedures before being moved up to one of the two the adoption centers. The cat adoption area is bright and cheerful, having undergone a remodeling in the last couple of years. There is a hallway showcasing individual cats, currently mostly kittens, as well as 3 colony rooms where cats who get along live in groups, plus 2 “get acquainted” rooms for potential adopters to meet cats up close and personal. 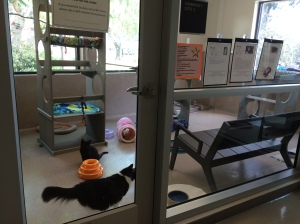 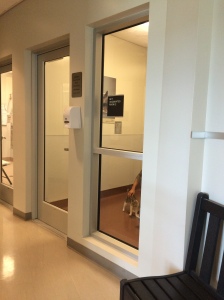 I first visited the holding area, off-limits to the public, to meet the new arrivals. My friend Judy volunteers in the back and always directs me to the cutest newbie of the day. It being kitten season, there were many adorable faces! Tiny but vocal Francine, 8 weeks old and underweight, really wanted attention. Her siblings Fanny and French Fry, in the next cage, were a little quieter but just as cute. Pretty Iris, recovering from the double whammy of spay surgery and having an infected eye removed, was still happy to have a tummy run and a neck scritch where the cone was bugging her. 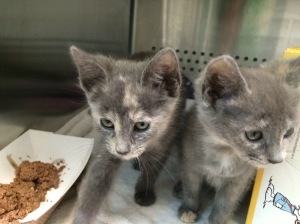 Up in the adoption center, spunky kitten Antelope was not slowed down by having 3 legs instead of 4, eagerly exploring and asking for head rubs.

Of course, it’s not all kittens. Kittens are adopted pretty quickly. It’s the older cats who often wait at the shelter for longer to find homes. And sadly, black cats and black and white cats wait the longest. Even with kittens, the black kittens spend a little longer than the others. Black cats are not bad luck; give them a chance! Here is 8-year old Bloomer exercising patience with roommate 4-month old Ricky Bobby in one of the colonies. 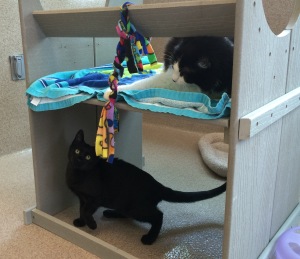 The oldest cat I visited today was 10 year old Norwegian Forest cat Tikka. She had lived with her family since she was a kitten but she didn’t get along with a new cat they brought into the home so she was surrendered to the shelter for adoption. A little shy but sweet and oh so beautiful, she needs a quiet home where she can be the only princess cat. 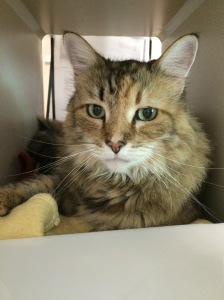 John Snow has been at the shelter since April. He’s quite the charming gentleman, and his Bengal roots mean he is active and playful. He was adopted during his stay at the shelter but returned because like Tikka, he needs to be an only cat. 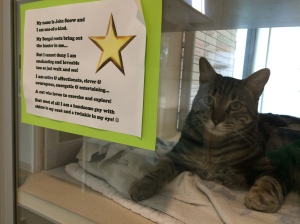 Six-year old Ma’am, brought in as a stray, doesn’t think much of my taking her picture to become a media star.

When I left after my 4-hour shift, 3 kittens had been adopted, 3 had been placed on hold, and 2 adult kitties, Poptart (surrendered because of a new baby in the home) and Aspen (surrendered because the landlord was asking for an increased pet deposit) were in the process of being adopted. Yay Poptart and Aspen!

It was dinner time, so everyone was happy. Here is Sweet Pea enjoying her meal.

If any of these sweet faces grab at your heartstrings, next Saturday, August 15, is the Clear the Shelters event, with help from Overstock.com and NBC, with free adoptions from 10-4. Come on by!

One thought on “International Cat Day, volunteering with an animal shelter”